Alpha Chi Omega was founded on October 15, 1885, at DePauw University in Greencastle, Indiana. At a time when women were just beginning to occupy seats in college classrooms, seven female students were encouraged by Professor James Hamilton Howe, dean of DePauw’s School of Music, to form a women’s society within the school.

Inspired, our Founders formed the 10th women’s fraternity in the country—the first to be in a music school. Sure they would be the last, the Founders chose "Alpha" and "Omega"—the first and last letters of the Greek alphabet—to form their name, with “Kai” (meaning “and”) in the middle, later changed to the Greek letter "Chi."

Dedicated to advancing “the intellectual, social and moral culture” of its members, our Founders’ vision has grown to include our women’s Fraternity, the Alpha Chi Omega Foundation, the National Housing Corporation and Pearl Stone Partners. Together, they serve more than 230,000 members in more than 140 collegiate chapters and nearly 200 alumnae chapters nationwide.

As musicians, our Founders included three pianists, a cellist/violinist/bassist, a composer and two singers. As collegians, they sought “friendship, artistic society and advancement of the principles of true womanhood.” 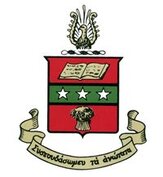 SYMBOLS AND TRADITIONS ARE WHAT HAVE CONNECTED ALPHA CHI OMEGAS FOR GENERATIONS.

Some remain rooted in our founding, like our colors and the lyre, while others have been adopted as we’ve grown and shifted. These symbols and traditions represent who we are and what we value, providing a great source of meaning to our members and creating a bond of sisterhood that connects through time and space.

FOUNDERS’ DAY–OCTOBER 15
Founders' Day is a celebration of our Fraternity’s birth. Traditionally, collegians and alumnae honor our Founders by coming together to celebrate Alpha Chi Omega’s heritage.

HERA DAY–MARCH 1
In honor of our patron goddess Hera, Alpha Chi Omegas dedicate themselves on this day to aid the happiness and well-being of others. Our remembrances include volunteering and fundraising for domestic violence shelters in local communities.

MACDOWELL MONTH–FEBRUARY
Named for the MacDowell artists’ colony in New Hampshire (Alpha Chi Omega’s first philanthropic project), this month also honors our Founders’ heritage as musicians. During MacDowell Month, our members are encouraged to be patrons of the arts, and attend exhibitions, concerts and other events.

The Symphony of Alpha Chi Omega

Celia McClure (1890-1983), a member of Delta chapter at Allegheny College, wrote The Symphony of Alpha Chi Omega. It appeared in the January 1912 issue of The Lyre magazine and was adopted as our official symphony in 1914. Because it reflects our tradition of harmony, it remains popular a century later and is read at many gatherings and events. 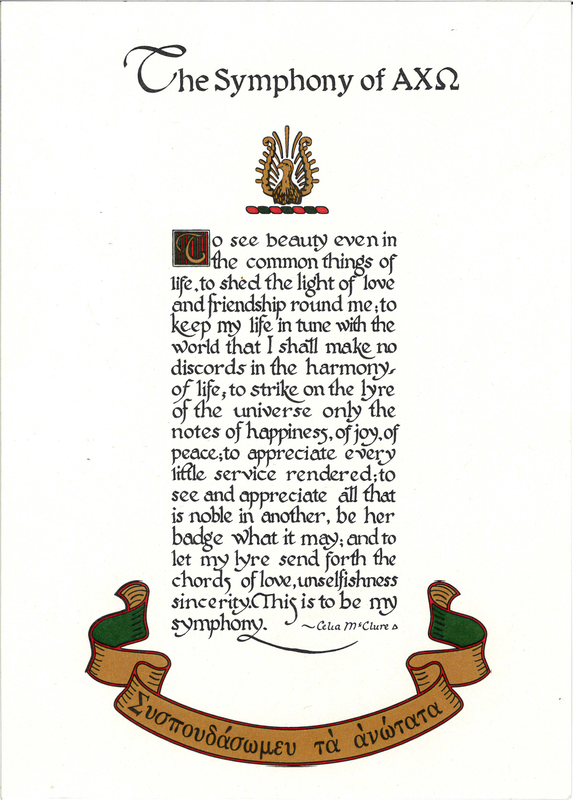